After all these years I decided to splurge a bit and do a northern Ontario winter birding trip, one that I had never done, but had always wanted to do.

Friday morning (February 7th) saw me get on the road dark and early (4:45am), supposedly beating Toronto traffic (didn't happen), and getting north of the City with sunrise. My first stop was a 'might as well stop', stopping in Bala to stretch my legs and look for the long-staying female Barrow's Goldeneye. I managed to find her within minutes of checking the ducks below the falls. I didn't take any pics, but there are some good one's here.

After a much needed bathroom break (#2) I kept on, with the Gogama burn from last year or 2018 (I can't remember) as the next stop. Tyler Hoar had tipped me off and this proved to be a great stop. Around lunch time I pulled into the happenin' metropolis of Gogama; the burn is easily accessible off Hwy. 144 and I was even able to drive in about 500m before stopping and getting my snowshoes on. I didn't really have a great plan of where to go and was just winging it. I managed some good luck though and within 200-300m of the car got my first Black-backed Woodpecker! I ended up only checking out a very small area of the burn (~3ha or so) and scored 13 Black-backed and a single American Three-toed Woodpecker!! Pretty damn sweet. Here's my eBird checklist. 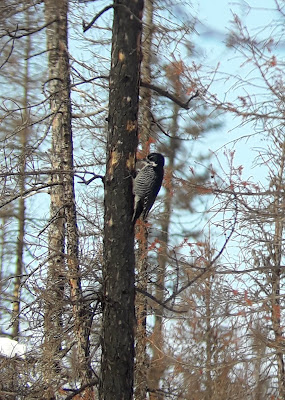 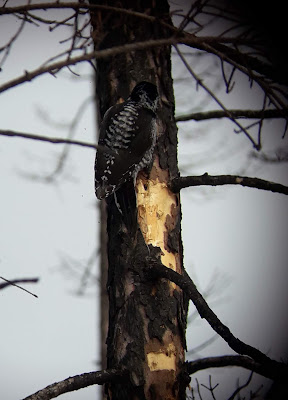 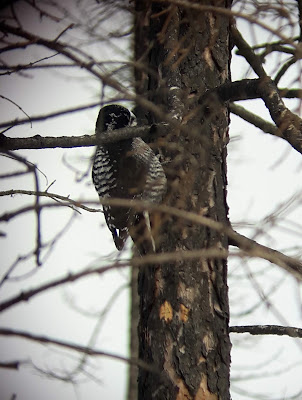 From here, I managed to make it to Cochrane just as the sun was setting. I stationed myself here for the next 3 nights, staying at the very nice and comfortable Westway Motel. This was actually a bit of a hidden jem (not sure how many things you can say this about in Cochrane!) and was reasonably priced and I'd recommend for anyone venturing up there.

Saturday I woke up and the temperature was a legitimate -35 degrees Celsius! 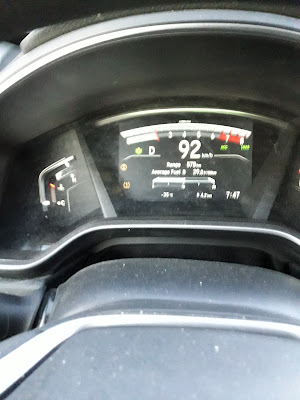 I think this is the coldest temperature that I've ever experienced, and I was actually concerned that it would limit my birding (in terms of birds being out), though this was short-lived.

After running my car for a few minutes I headed west, towards Smooth Rock Falls (SRF). About 20 minutes in, I spied a dark blob at the top of some trees in a small farm field. Getting a better look, revealed it to be my first Northern Hawk-Owl of the trip!

Reaching SRF I headed north, towards Fraserdale and the Wetum Road. It didn't take long to start getting huge flocks of finches along the road. It was a little staggering at how many Redpolls were present, along with lesser numbers of Pine Siskins, White-winged Crossbills and the odd Pine Grosbeaks. Finches were fairly skittish, but I managed to pick out several Hoary Redpolls too, including some Hornemann's! 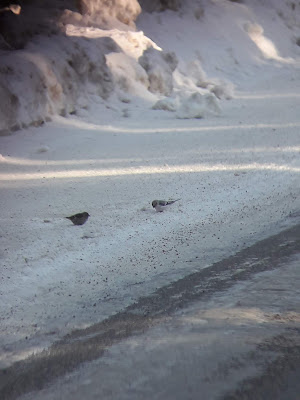 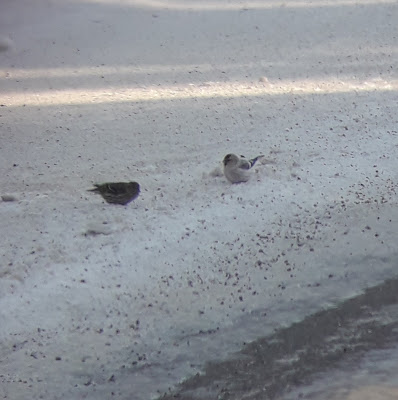 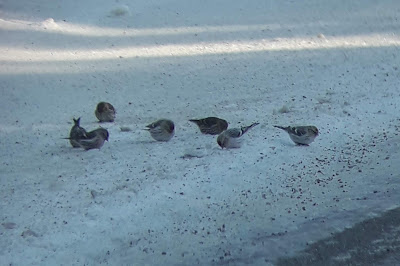 I had initially planned to drive up to the start of the Wetum Road to check it out (I'll drive up to Attawapiskat some other year), but because of the numbers of finches, only decided to check the first 40 km, before turning around, having wanted to check areas to the west of SRF.

I didn't end up finding anything else of real note between SRF and Hearst, despite targeting essentially all of the open areas, where I thought I'd run into a Northern Hawk or Great Gray. I did come across lots of more finches, a Northern Goshawk (great views!), and several Northern Shrike's (they appear to all be up north...). That was it for Saturday, and I made my way back to Cochrane.

Sunday I got up and headed straight for Hwy. 652, that runs from Cochrane to the Detour Lake Gold Mine - a total of 182 kilometres! It's surprising, but the road is open year-round and it's sole purpose is to service the mine. I think this hwy. gets Willow Ptarmigan (take a look at eBird and see the sightings in Quebec) and this was my target.

Right off the bat the day started well, and I found the 2nd Northern Hawk Owl of the trip perched in an open area along Hwy. 652. 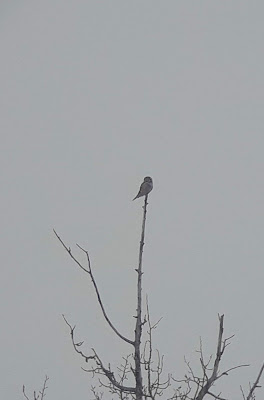 Again, finches stole the show and in epic fashion. While there are too many checklists to provide (I ran checklists over 20km for the 165km that I drove), the total number of finches was incredible: 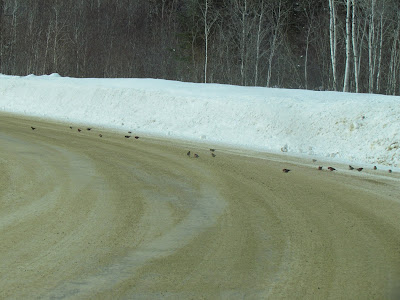 In addition to the finch fest (I think it's safe to say that I now know where all the redpolls in Ontario are...), I had several Canada Jay's, 2 Northern Shrike's and best of all, a group of 4 Sharp-tailed Grouse. 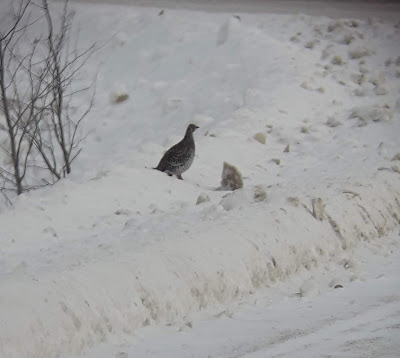 After getting back into Cochrane around 2pm, I decided to check the agricultural areas around town and lucked into a single Evening Grosbeak and 2 Purple Finches. Needing some gas I stopped by the Canadian Tire in town only to have a Northern Hawk Owl perched along the Trans-Canada in front of the gas station (talk about efficiency)!

I ended up checking some more agricultural areas to the south of town and came across another(!) Northern Hawk Owl (#4 for the trip)! With the 4th Hawk Owl in the bag and sunlight fading fast, I called it and headed back into Cochrane for the night.

Monday I was up nice and early, eager to get back to Kitchener-Waterloo and to see Lill. I had another(!) Northern Hawk Owl just north of Englerhart, making it a 5 Northern Hawk Owl tour. I stopped in Earlton to look for the colony of Eurasian Collared-Dove's (no dice) and left after about 45 minutes.

All in all a nice little tour; luckily the weather (generally) cooperated, as did the birds!
Posted by Ken at 4:39 PM

Ken Burrell
Working on my masters on bird migration and working part/full-time. In regards to birds, I'm really interested in vagrancy, bird migration and conservation. I've been interested in birds/outdoors pretty much my entire life, but like an onion, I have layers and there are more things than just birds in my life (yes I said it). Other than birding, I play hockey, ball-hockey, do pilates, work-out and enjoy reading the odd novel. Pretty multi-dimensioned guy what can I say :).